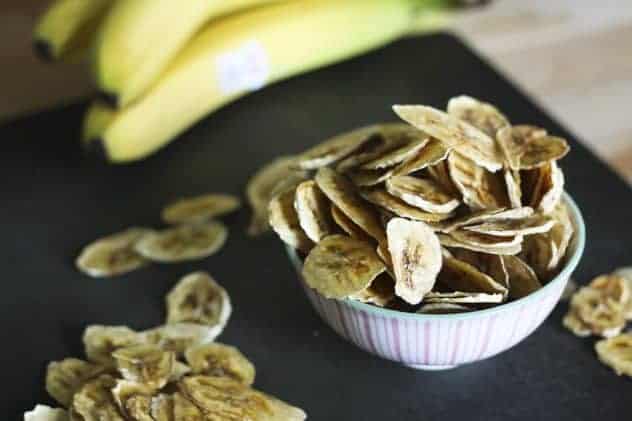 Back in October of last year, we made the sixteen hour drive through Pennsylvania, Ohio, and way up north into the tippy top of the lower peninsula of Michigan over The Big Mac and into the Upper Peninsula to see my dad and stepmom. We stocked up for the road trip with the usual suspects: pretzels, sandwiches, water, apples, bananas and whatnot. We ate most of what we had packed on the trip north, but were three days into the visit before we realized we had forgotten a bunch of bananas under the seat in the van. They looked, at that point, like they were fit only for banana bread, so I brought them into the house and asked Val whether she’d like to use them. Val said, “Oh no! Those are perfect for banana chips!” She sat down, sliced them, put them on dehydrator trays and within minutes the machine’s fan was whirring and the house smelled divine.

While the bananas were doing what they had to do, Val offered me a handful of the banana chips she had already made. They were crisp and intense and sweet and totally different than the banana chips I’d had before. All the other ones were greasy* and had a weird after taste. These were caramel brown and clean tasting.

*This is because the vast majority of banana chips (dried or otherwise) that are commercially available are fried, and often in palm oil. Hooooooboy. That previously healthy sounding snack doesn’t sound so healthy now!

Val told me, “Get the reduced price bananas that are intended for banana bread and use those. That way the bananas are already very sweet. When you dry those they’re just that much more flavourful.” So, in the name of quality control, we ate our way through their stash of banana chips for the rest of the visit. Dad and I ate banana chips with apple chips, banana chips with pear chips, triple decker banana/apple/pear chip ‘sandwiches’, and smeared banana and apple chips with peanut butter. We ate a lot.

On the drive home, Dad called me and said, “I just had an idea. What if you sprinkled a little nutmeg over the banana slices as they were dehydrating? Then they would be like eggnog chips.” Ohmygoodness, that was a good idea.

The day after we got home, I was eager to put the idea to the test. I sliced about seven pounds of bananas as thinly as I could without making them fall apart, laid them out on trays and grated a little fresh nutmeg -just a smidge- over the top of all of them. A little over twenty four hours later, we sampled our first banana chips- dead crisp and sweet with full banana flavour -almost like vanilla- and a hint of nutmeg. It didn’t scream eggnog, but it was so good. Now, I know we have a lot of people eating here (okay, we have a Viking horde) but nothing prepared me for the speed with which my guys ate an entire dehydrator’s worth of banana chips. It took them two days. TWO DAYS. Two days to eat seven pounds-worth of bananas dried into chips.

In the months that have passed between October and now, I have made close to fifteen batches of nutmeg banana chips and watched them disappear by the handful into my husband, children and their friends. They’re so good that a couple of my kids’ friends’ families have purchased dehydrators to keep their kids in nutmeg banana chips. If the fact that they’ll go to a jar of banana chips to sate their hunger before hitting a bag of Fritos isn’t enough to keep me making batch after batch, then this is; even the two vehement anti-fruit two-some loves nutmeg banana chips. I’m going to keep making these until no one wants them anymore, which doesn’t appear to be anytime soon judging by the current rate of consumption.

I have it down to a science and can fill a dehydrator with banana slices in about thirty minutes. And while we like ours thin and crispy, there is a little play you can do with it. Do you want a finished banana chip that’s slightly chewier? Just start with thicker slices! Mess around with it and figure out which way you like them best.

And then have a little more fun. Try them by the handful, on peanut butter sandwiches, in trail mix, or one chip at a time smeared with a little Nutella. Let me know what your favourite way is to eat them. I can’t wait to hear! 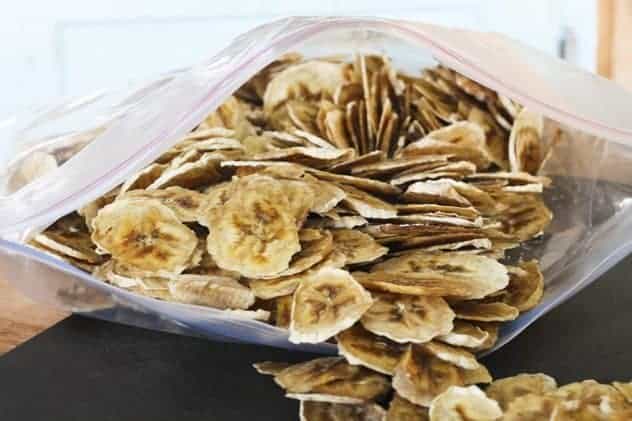 Rate Recipe Rebecca Lindamood
Prevent your screen from going dark
Print Recipe Pin Recipe
When overripe bananas are dried with a little nutmeg grated over the top, they become a sweet, healthy, crispy treat. My kids and their friends go crazy over these. I'm sure yours will, too!