Hotter Than the Hinges of Hell Habanero Jelly 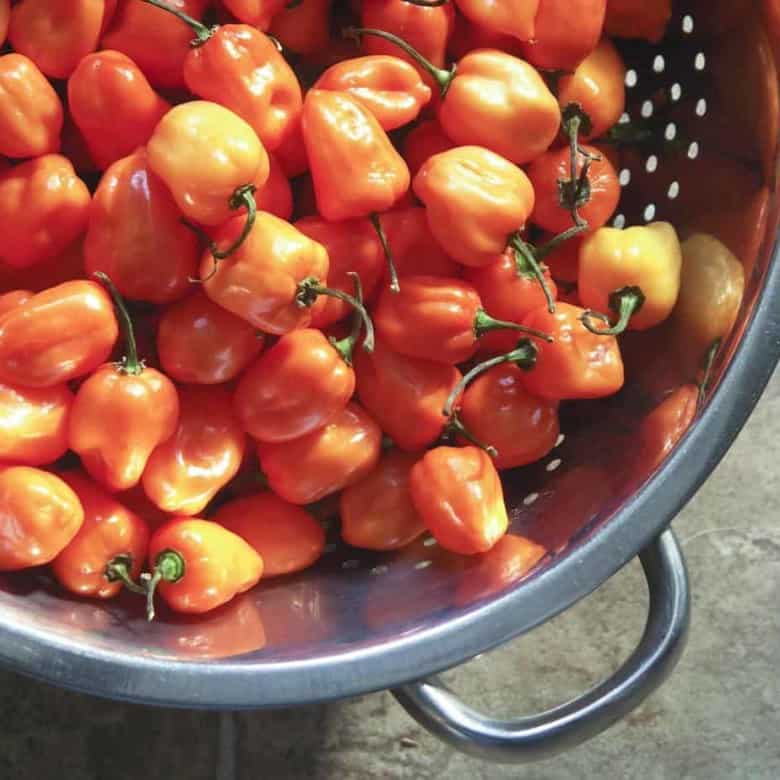 I want you to be aware that this recipe is not for the faint of heart or wimpy of tongue. It is a pure habanero relish. As in lots and lots of chopped fresh habanero peppers.

Habaneros, for those who do not know, are one of the hottest fresh peppers that are widely available. They usually range between 100,000 and 350,000 Scoville Units*. And for comparison’s sake, a fresh jalapeno pepper runs between 2,000 and 10,000 Scoville Units. Just so’s you know.

*Scoville Units are the standardized unit of measure for the ‘hotness’ of hot peppers. According to Wikipedia, “Scoville scale measures the hotness or piquancy of a chili pepper, as defined by the amount of capsaicin it contains. Capsaicin is a chemical compound which stimulates chemoreceptor nerve endings in the skin, especially the mucous membranes. The number of Scoville heat units (SHU) indicates the amount of capsaicin present.” In other words, it gives you a pretty good idea how much it is going to hurt to eat a particular pepper.

Habaneros are beautiful. So pretty but so dangerous. You’re looking at two pounds of fresh habanero peppers. I used every last one of them in a fresh batch of Hotter Than the Hinges of Hell Habanero Jelly.* And I coughed and coughed and coughed and my eyes watered and my nose ran. And I was prepared for it. I’ve made this once a year for at least six years. I’m going to say this now: I will litter this post (straight up LITTER it) with warnings. Because you have to be careful when making this.

*For the record, I know it’s not technically a jelly since it has abundant little bitty pieces of habanero laced through it. A jelly is smooth. This? Is not.

Okay, so it’s a jelly that isn’t a jelly and it’s painfully hot. Why in heck would you want to make this? Because the flavor is out of this world. It’s hot, sweet, fruity, and tangy at the same time. Chile heads: this is a slow-burn and it lasts. If you like habaneros you will love this. It’s a stunningly beautiful flame orange with flecks of habanero suspended throughout. Serve over cream cheese on crackers or loosened up with a fork and brushed onto grilled meat.

Give the gift of painful taste to the chile heads in your life. They’ll love you forever!

Hotter Than the Hinges of Hell Habanero Jelly

Trust me. Even if you think you’re impervious to capsaicin you have no idea how painful it can be to deal with two pounds of habaneros without gloves. Before you start, it’s a good idea to line a bowl with a disposable plastic bag to hold all your stems and seeds. Thusly:

Cut the stem off each pepper and cut in half. If you want face-meltingly hot pepper jelly you can leave the seeds and membranes intact in the peppers. If you want a milder jelly (in which case you may want to consider jelly making with something other than habaneros?) you can use the tip of a spoon to dislodge the seeds and as much of the membrane as possible.

I normally seed about half of the peppers and leave seeds in the other half. We like-a it hot!

Add half the peppers to the bowl of a food processor fitted with a stainless steel blade. Pulse until the peppers are minced but not liquified. Now. BE CAREFUL WHEN REMOVING THE LID! When you pulse the peppers you are atomizing some of the oils they contain. Stand with your face well away from the bowl when you remove the lid. This is a big old measuring cup full of pain.

Stir the cider vinegar and powdered pectin into the minced peppers and place over  ‘HIGH’ heat. Do NOT, I repeat, do not put your face over the pan while it is boiling. It will hurt. It will make you cough. It will make your eyes water uncontrollably. You don’t want to breathe the fumes in on this. Bring the mixture to a full rolling boil (a boil that does not stop when stirred) stirring constantly.It will look much like this:

When the mixture reaches a full boil dump in all the sugar at once and stir quickly. Bring the mixture again to a full rolling boil, stirring constantly. Again, be careful. Don’t breathe in too deeply near the boiling pot. It will look like this before it reaches a boil.

As soon as it reaches a full boil, begin timing it and allow to boil hard for exactly one minute. After the minute has passed, remove from heat and ladle quickly into clean, sterile jars (for instructions on how to do this, click here!) For the love of all that is holy, BE CAREFUL! Now you’re not only dealing with hot pepper oils, you’re dealing with BOILING hot pepper oils and hot jelly. It sticks on your skin and hurts like a son of a gun!

Wipe the rims, add clean lids and gently screw rings onto the jars. Process for 10 minutes at a full rolling boil. (For instructions on how to do THIS, click here!)

When the jars are done processing, carefully remove from the water bath and place on a cooling rack positioned over a tea towel. If you pull the jars straight up and out jelly will not leak and endanger the seal. Don’t worry about the water on top, it will seep out under the rings and onto the towel.

The jars look like they’re on fire. Metaphorically speaking, they are!

Is it my imagination or is this jar a little misshapen? Could it be the heat from the peppers?