A hot skillet full of cornbread is my idea of comfort food. My Grandma made the most glorious buttermilk cornbread. But when you brown up some cubes of smoky ham and diced onions to delicious golden brown perfection, toss in a generous amount of cubed cheddar cheese, and fold that all into Grandma’s cornbread batter before scraping it into a screaming hot cast-iron pan with melted butter in it and baking? Well, shoot. That’s where we’re talking about heaven in the form of food. 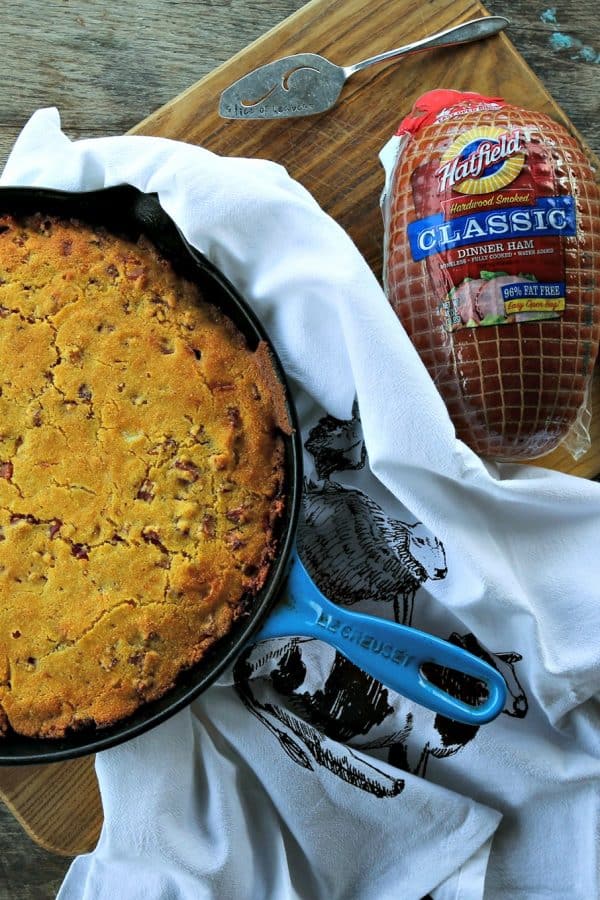 My Grandma told me once that her idea of the perfect cornbread was one that held together without being sweet to cover up all that lovely corn flavor. But this Ham Cheddar Onion Cornbread, friends… That roasty, toasty cornbread exterior is fairly bursting with golden brown ham cubes, caramelized onions, and pockets of melted Cheddar cheese. A wedge of it plus a big green salad is all you need for a fast, filling dinner. If you’re so inclined, you can serve it alongside a ham dinner, a hearty soup, or just as a stick-to-your-ribs snack. I’m fairly certain my Grandma would approve. Hatfield Quality Meats Classic Boneless Ham is a perfect choice for Ham Cheddar Onion Cornbread because those adorable family-sized boneless hams yield enough to make a hearty batch of cornbread and have enough ham leftover to dice and serve on salads, stir into ham and egg muffin cups, add to soups, grind in the food processor for a ham ball recipe, or even make a pile of ham sandwiches. 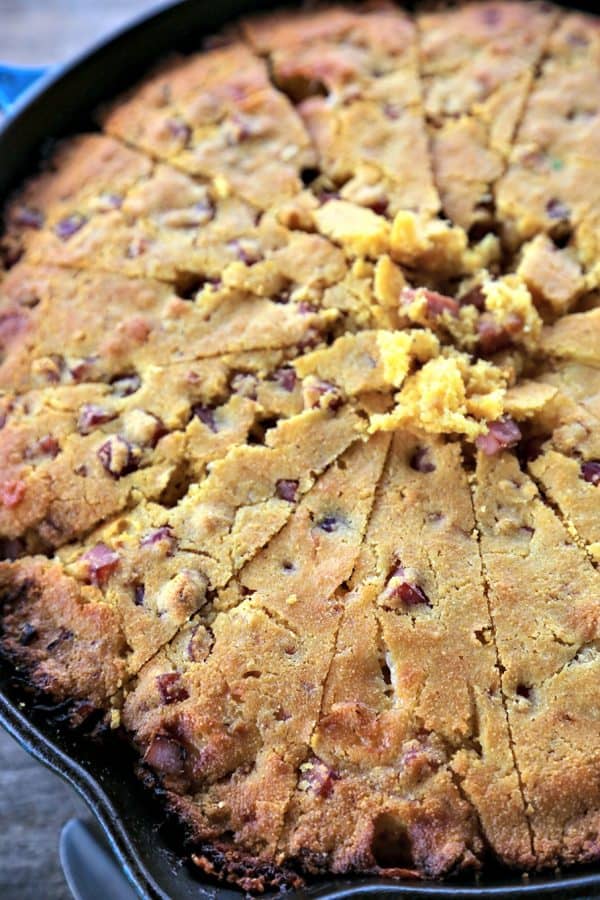 Who wants a slice?

Use this to make Ham Cheddar Onion Cornbread: 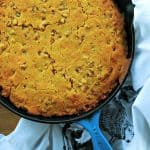 What fun dishes are you making for Easter? Tell me in the comments for a chance to win a $100 Gift Card!

You may receive (2) total entries by selecting from the following entry methods:

3. Blog about this promotion, including a disclosure that you are receiving a sweepstakes entry in exchange for writing the blog post, and leave the URL to that post in a comment on this post

4. For those with no Twitter or blog, read the official rules to learn about an alternate form of entry.

This giveaway is open to US Residents age 18 or older (or nineteen (19) years of age or older in Alabama and Nebraska). Winners will be selected via random draw, and will be notified by e-mail. The notification email will come directly from BlogHer via the sweeps@blogher email address. You will have 2 business days to respond; otherwise a new winner will be selected. The Official Rules are available here.

Be sure to visit the  Hatfield Quality Meats Campaign Page on SheKnows where you can read other bloggers’ posts!