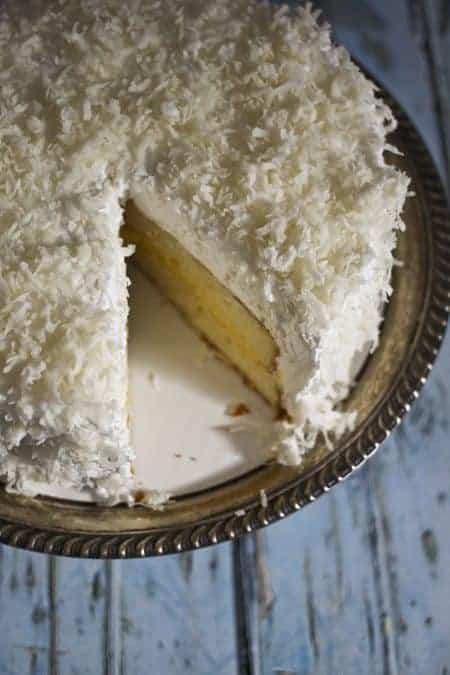 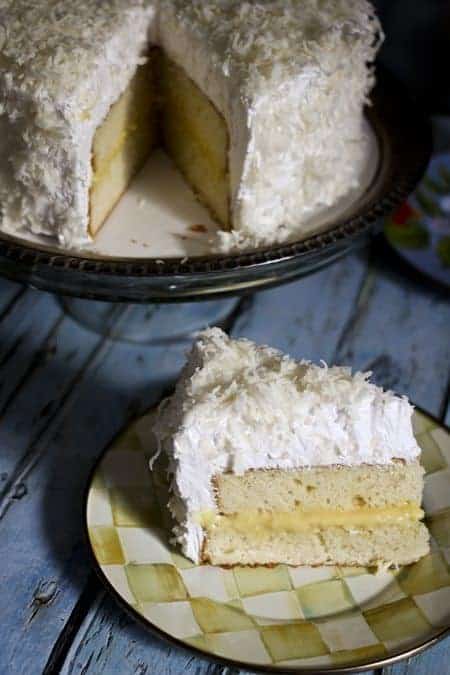 Is it wrong that I post two desserts in a row? Do you hate me? I can’t help it. I have a really good reason.

Yesterday, my second born turned fourteen. His requested dessert was a nod to his southern daddy. He wanted a “coconut cake.” I decided immediately that he’d have the honest-to-goodness, big, white, fluffy Coconut Cake. And I have to admit, with all the cakes I’ve made, this one daunted me ever so slightly. It’s a CLASSIC in big southern, swirly letters. It’s THE cake for Christmas time. It’s south of the Mason Dixon and sweeter than tea. And honestly, even with a pair of southern grandparents and a hubby who hails from Ol’ Virginny, I felt unqualified.

I turned to the bible of southern cookery: Southern Living. Specifically, the 1995 Best of Southern Living Cookbook. They held my hand through the cake and frosting portions, but I did my thang on the lemon filling because I feel very much on home turf when we’re talking lemon filling territory. I’m a lemon curd girl through and through, and absolutely, positively refused to do anything other than a real-deal, pure lemon curd in between the layers of that lovely vanilla butter cake.

Once I baked the layers, I felt like I hit my groove and my cake mojo returned full force. This ended up being one of the most fun cakes of all time. It ABSOLUTELY requires the use of a hand or stand mixer and I’ll tell ya, my Kitchen Aid stand mixer made this cake happen very easily. It whipped the egg whites I folded into the cake batter. It whipped the egg whites and then the boiled frosting to fluffy, marshmallow-y perfection. My poor arm would’ve fallen off whipping it by hand, I have no doubt. 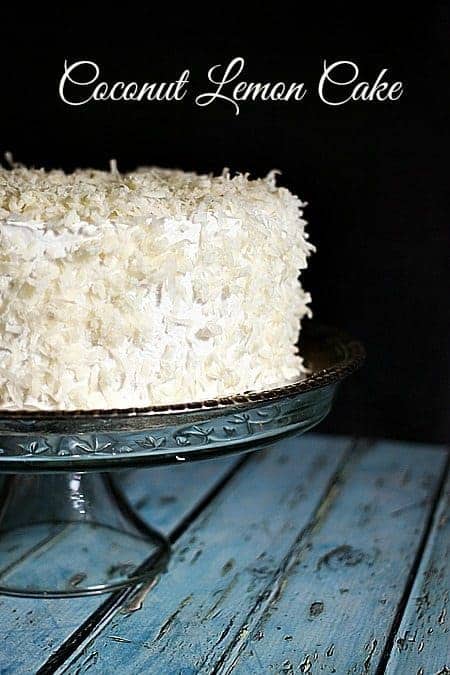 When I was done with the cake, I stood back and thought, “DANG! I did my grandma proud!” And then I wondered just how long my babies would stay sugared up after a slice of this decadent, gigantic, snowball of coconut love. I bribed the birthday boy into letting me slice into it to see how it looked. The bribe? I let him eat the piece. He’s such a helper.

His reaction confirmed that he is a descendent of some certified DAR ladies and their gentlemen, because he ooooed and aaaaahed and generally exclaimed in a young-manly way over the white confection that sat on his plate.

After eating his enormous wedge of cake, he was jet-powered for at least an hour of sledding down our most imposing and intense hill. He proclaimed twelve inches of recently acquired snow “almost as pretty as the cake!”

I for one would be a-okay with sledding down a hill covered with this frosting. 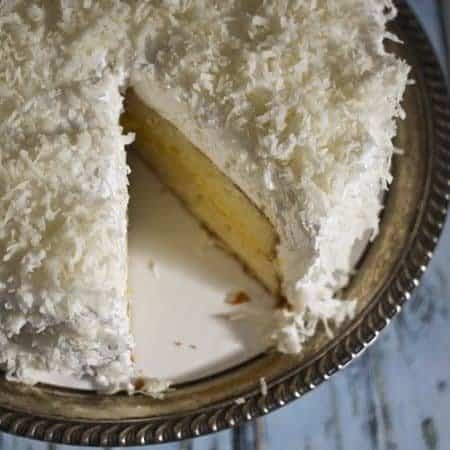 For the Vanilla Butter Cake:

For the Boiled Frosting:

To Make the Cake:

To Make the Boiled Frosting:

To Frost and Garnish the Cake: