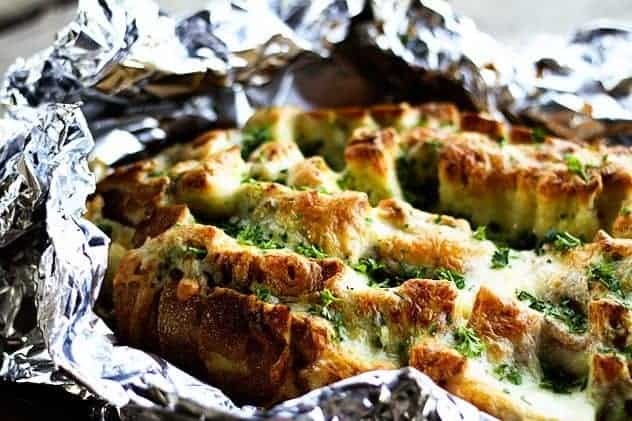 Last week I took my five boys to the playground to meet some friends and somehow or another ended up taking ten boys home with me. It’s funny how that happens sometimes.

I was happy I had the extras around, though, because I was working on a few recipes and needed some unvarnished opinions. One of the recipes I had on the docket was one I had made previously for my family but wanted to make again for the purposes of double-checking myself. I was brushing up on my finger food skills and had done my own version of the cheese breads that have circulated the great interwebs for some time.

Why work on snacks right now?

Even more importantly (to me), the season premiere of Doctor Who is on Sunday. Hello. This year is so very timey wimey. This clearly requires food, and lots of it.

Have you wrapped your brain around all the delicious possibilities yet?

This cheese bread is just about the perfect option. It doesn’t require any exotic ingredients, it’s easy as can be to put together, it can be cooked in your oven or on a grill at a tailgating party, and it’s a serious crowd pleaser. In fact, when I said, “Go ahead, guys… dig in…” This is what happened. 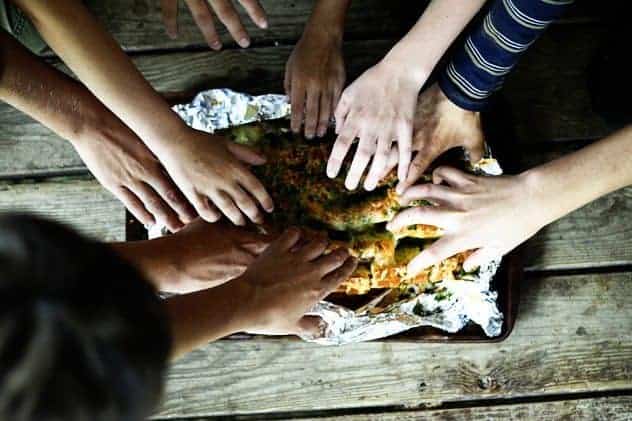 What you can’t see in this picture is my husband sitting off to the right growling because the boys’ hands got to the bread before his did. Behold the power of the cheesy bread. 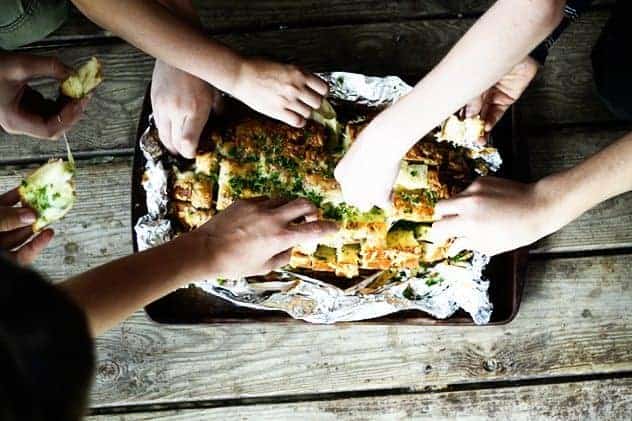 Right after this picture was snapped, The Evil Genius performed a perfect swan dive directly into the center of that loaf. He proclaimed it to be dangerously good.

The boys (mine and the others) concurred.

Then there were requests. My boys asked to have it at their birthdays. Their friends asked that I serve these at the boys’ birthdays. Then one friend asked that at the next sleepover, I ONLY serve this bread, and lots of it.

Those boys are no fools: they know good food when they taste it. It’s hard to go wrong when you start with soft-on-the-inside/crusty-on-the-outside Italian bread that is cut into grab-able squares, generously doused with melted butter mixed with minced green onion and garlic, toasted til hot and tender, then crammed full of Cheddar cheese and baked until bubbly with browned bits of cheese capping it. I suppose the shower of chopped parsley at the end is strictly optional, but it does look nice and it at least makes a valiant attempt to add some breath freshening to the party.

Like a fool, I told the boys about the cook’s tax (the crispy bits of cheese stuck to the foil after the bread is gone) and like the smart young men they are, they ate all of it.

If any of those guys are reading this, I have a message for them, “Unlimited Tailgating Bread is yours if you come clean my barn and help me plant garlic this fall.”

That oughta do it.

Rate Recipe Rebecca Lindamood
Prevent your screen from going dark
Print Recipe Pin Recipe
Soft-on-the-inside/crusty-on-the-outside Italian bread that is cut into grab-able squares, generously doused with melted butter mixed with minced green onion and garlic, toasted til hot and tender, then crammed full of Cheddar cheese and baked until bubbly with browned bits of cheese capping it. This is a true crowd-pleaser!