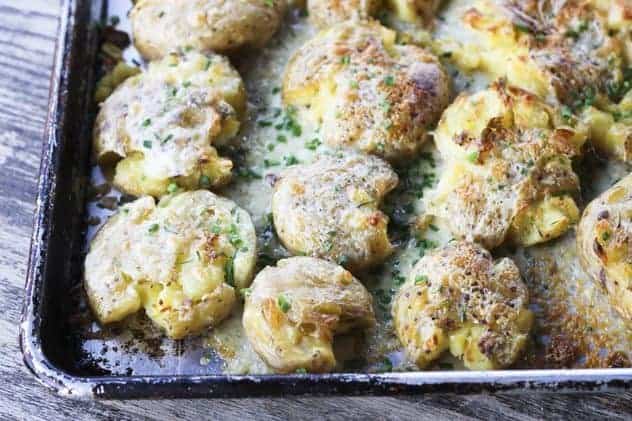 Based on that theory, I went and did this.

And it was great.

Potatoes plus cheese plus high temperatures plus herbs equals maddeningly wonderful, mouth watering goodness. Good begets good, so I went and did what you see above. Those are nothing less than crash hot potatoes with a sinful amount of extra sharp Cheddar cheese and a fistful of chopped chives. Hello, Gorgeous.

…or should I say, “Hello, Delicious.” Yes. That’s much more like it.

As I said before, I prefer to use leftover salt potatoes to shorten the already quick process of making these lovely, addictive little crispy morsels of potatoey heaven. (I’d fail English for that sentence if I were being graded. But I’m not. Ha ha! Fragments. Double ha!) If you’ve had salt potatoes before, you may be scratching your head in bewilderment. “Leftover salt potaotes? LEFTOVER salt potatoes? Que? How is this?” It’s true. This is an anomaly, but it is one for which I plan. I make  a triple or quadruple batch, let everyone eat a goodly amount, then I stand by the salt potato bowl with a fly swatter and thwack the hand of any child or husband who dares stand between me and my plans for crash hot potatoes.

The truth is, when I tell them that I made that many not so that they could gorge themselves into gluttony, but so that I could make crash hot potatoes the next night, they back off voluntarily. Such is the power of the crash hot potato.

With what would you serve this? I think the question is what WOULDN’T go well with these? Steak, chicken, fish, or pork off of the grill or roasted are a natch. I’ll tell you this, though. The last time I made these, I served them with a steak. Half of my steak was left and the potatoes were looooooooong gone.

Rate Recipe Rebecca Lindamood
Prevent your screen from going dark
Print Recipe Pin Recipe
Leftover salt potatoes are turned into something heavenly when smashed, drizzled with olive oil and roasted until dead crisp. Then they become stratospheric when you top them with massive quantities of extra sharp Cheddar cheese, broiled 'til bubbly and hit with a shower of chopped chives right before serving. Inspired by Ree Drummond, Krysta Guerrero, and Jill Dupleix.

P.S. Do NOT throw out those crispy little cheese bits on the pan. You’re going to want to eat those. Those are classic cook’s tax items. In fact, you may want to lick them from the pan. I do advise letting it cool a bit before trying that. Not that I’ve ever done that. Ow-th.