I think the key to having a successful food blog is having many friends who like to eat. I can tell when my friends are on a diet because they avoid my company in public. They know as likely as not, I’m going to reach into my bag and pull out some sort of food I’ll try to foist on them. One of my friends laughingly called me a food pusher a couple of months ago when I tried to tempt them (not knowing they were watching their waistline) with one treat or another. For better or worse, I suppose that is what I am. Besides there being only so much food I can stuff into my own face, it’s just more fun to share with friends!

Right now, however, is the most wonderful time of the year to be a food pusher. Everyone is feeling festive and snacky and willing to nibble on a little bit of this or that. Case in point: I decided to play around with ‘a tweest’ on my Grandma’s Salted Caramel Corn recipe and made a big batch of Cashew Maple Caramel Corn. I carried it with me to share with the fellow moms, dads, cast, and crew members working on a local production of The Nutcracker. Cashews? Nutcracker? It just seemed like the right thing to do. 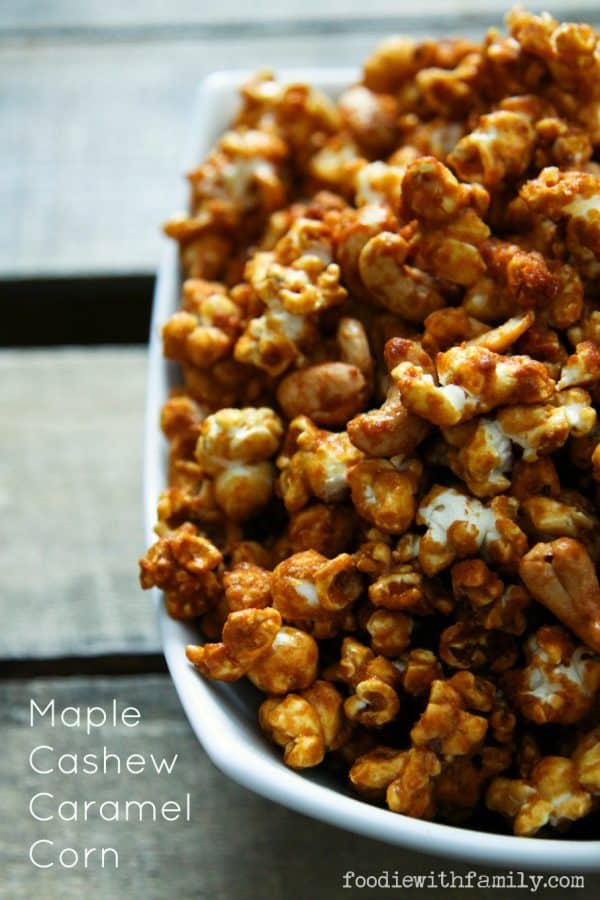 As friends walked by, I opened my bag of Cashew Maple Caramel Corn and waved it under their noses. That was all it took to get them to agree to help me ‘focus group’ my recipe. Adults and kids alike were enthused. One friend announced that he gave it two thumbs up but wished he had more thumbs because it deserved more than two. I’m calling the Cashew Maple Caramel Corn a great success.

Cashew Maple Caramel Corn is a maple syrup lover’s dream made with a simple caramel using the darkest maple syrup you can find, brown sugar, vanilla, salt, and an optional splash of bourbon. Don’t worry, it’ll be abundantly clear when you add that bourbon to the caramel that all of the alcohol cooks off immediately as you watch it bubble and threaten the rim of the pan. What remains of the bourbon is it’s essence; richly caramel, earthy, and slightly smoky.

Happily, while I did mess around with the basic ingredients, one feature of my Grandma’s Salted Caramel Caramel Corn that made it so wonderful -the fact that it doesn’t stick to teeth or dental work like braces- remains. The Cashew Maple Caramel Corn is crispy and coated in a perfect maple caramel that doesn’t stick in your teeth! 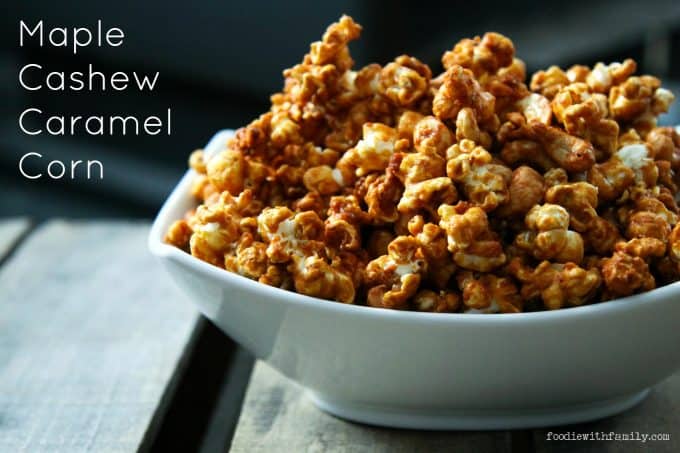