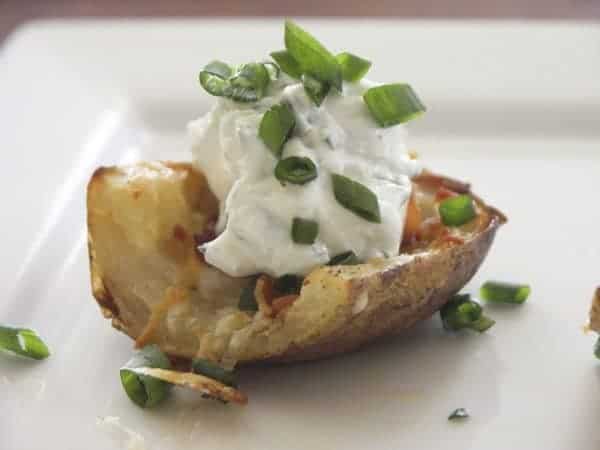 My father has told me more than once that he has one huge regret about how he raised my siblings and me. If he could go back and do it all over again, he would not teach us to love potato skins and the heels of bread loaves because he had to fight for every one he ate after he did. Does he have any other parental regrets? Who knows? I stopped listening and started drooling after he said ‘potato skins’. Sorry, Dad.

Ah the potato. God’s perfect tuber. I am eternally grateful to my Dad for selflessly showing me the delicious potato skin path through life. Baked potatoes topped with butter, salt and pepper are a wondrous thing but they’re not the only thing baked potatoes can do. Loaded Baked Potato Soup (shameless self-promotion alert), our family favorite baked potato bar, and twice-baked potatoes are all stupendous. But the apotheosis of potato preparations, the be-all-and-end-all of potato eatery is the baked potato skin. Fresh from the oven, crisp on the outside and fluffy on the inside, seasoned and cheese laden, the baked potato skin is what every little spud aspires to become. Can you imagine anything more perfect than this?

Well, okay. How about anything more perfect than this?

Every time I see a plate of 12 dinky potato skins for $6.99 in a restaurant*  I want to jump on the table and yell, “I can make four times that amount with four times the toppings for that same price! Highway robbers!”

*You know, on those 2 nights a year we eat in a restaurant. Maybe The Evil Genius would take me out more frequently if I stopped jumping on tables and haranguing the staff.

This is truly a wallet-friendly party food. Out of the same batch of baked potatoes that you got your Loaded Baked Potato Soup you can get these stupendous Baked Potato Skins. Let me lay out the plan for you.

And, hey! Sunday is the Super Bowl and the Olympic Games start next week. This is hard-core finger food time, people. Whether you’re attending a party, hosting a party or attempting to become one with your couch, you need to make these. They’re guaranteed to win friends and influence people. At least it wins and influences me.

Cut each baked potato into quarters, taking care to keep the skin as intact as possible. But don’t just cut them willy-nilly. Take  a second to consider your potato. Cut in half first.

Now look at your halves. See how potatoes are generally oval shaped? You want to cut those halves in half again, but cut them so that you’re cutting it through the longest angle of the oval so that your quarters will be relatively stable on the pan when you lay them down. That would be front to back on the left potato half or side to side on the right potato half.

Use a regular soup spoon to carefully scrape most of the insides out of each potato quarter into a large bowl, leaving behind a shell of about 1/4 to 1/2 of an inch.

I know some folks take more of the potato out of the shell, but I like my potato skins a bit more substantial. Feel free to cut back on the amount of potato, just be sure to keep a shell intact or your potato skin will go floppy. Not so appetizing sounding, is it?

When you have eviscerated all your potatoes divide your potato shells between two rimmed baking sheets. Use the potato ‘guts’ to make baked potato soup or tightly wrap with plastic wrap, refrigerate and make soup within the next three days.

Place sheets in the top third of your preheated oven. Set timer for 10 minutes.

While the potato shells are toasting, turn your attention to the bacon. Slice the bacon into 1/2-inch thick strips and slide into a large skillet over medium heat.

Cook until the bacon just begins to turn crisp. Transfer to a paper towel lined plate to drain.

Move the drained bacon to a cutting board and coarsely chop.

Remove potato shells from the oven and generously cover with the grated cheese, using about 1 cup per baking sheet. Scatter the bacon pieces evenly over both sheets.

Sprinkle the remaining grated cheese over the bacon and return the pans to the oven. Bake for 6-8 more minutes or until the cheese is melted. If you like your cheese a little on the more toasty side -and I do- allow to cook an additional 2 minutes or just until the cheese is beginning to brown on top but is still gooey underneath.

Move baked potato skins to a platter. If so desired, garnish with sliced green onions and serve with a bowl filled with the Creamy Onion Topping.

And boy, do I ever so desire.

Later this week, in keeping with our preparations for the Super Bowl and the Olympic Games there will be an epic barbecue smackdown wherein I take on…

What will win? My Carolina Style Barbecue Sauce or my Smokey Tomato Based Sauce? Hmm?