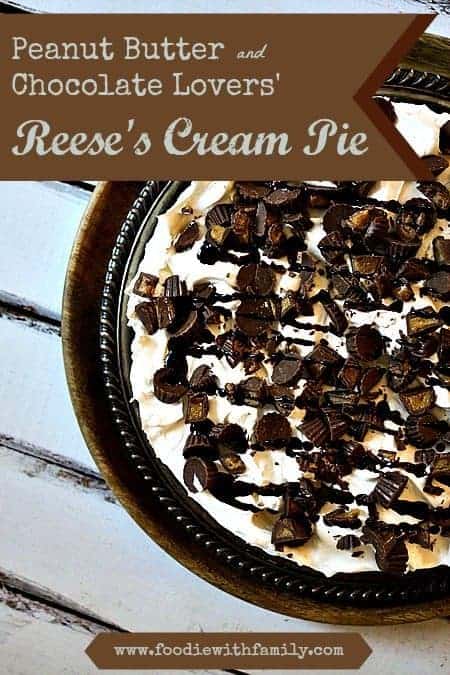 See that? THAT is HEALTH food. For your soul, that is. If you’re seriously calcium deficient, then this should give you a nice boost by virtue of the loads of heavy cream in it. Oh! And there’s chocolate which has lycopene and is great for hypertension. So there’s that.

Dangitall. Forget it. I’m just going to level with you. It’s all-caps INDULGENT, people. The crust is made of THIRTY Peanut Butter Oreos and butter… because Oreos alone just won’t cut it. The first layer you see is a velvety smooth filling of peanut butter, cream cheese, confectioner’s sugar, and heavy cream. The middle layer is a silky ganache made of dark chocolate melted and stirred into heavy cream until glossy.

Yeah, we’re not done with the heavy cream just yet: not even close, really. In the next step, we whip an entire pint of heavy cream with some more confectioner’s sugar to spread over the top. That all goes into the freezer for a few hours to firm up. Since we’re all in on the FUNFUNFUN scale, we might as well gild the lily right? Onto the top goes an entire eight ounce bag of Reese’s minis followed by a drizzle of chocolate syrup.

The result of all of this luxury is a Reese’s Cream Pie sure to wow the Peanut Butter and Chocolate Lovers in your life.<!–more- To Keep Reading and Get the Recipe, CLICK HERE!-> 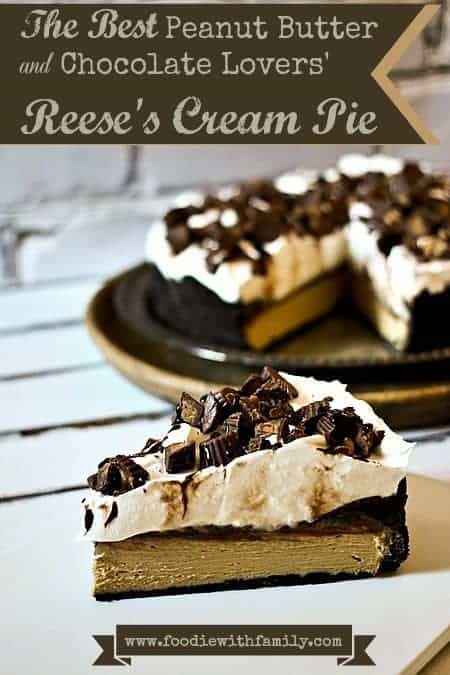 Is anybody mentally tallying up the amount of heavy cream and sugar and chocolate in this? JUST STOP IT RIGHT NOW! This is meant to make you happy. It’s meant to make life just a little sweeter for as long as you have it in the refrigerator (which, by the way, shouldn’t extend past a month in the freezer for quality purposes) and make smiles a little brighter. I waved that slice you see above in front of one of my sons when he came downstairs this morning. His response was “Oh. This is happy food.” followed by a little shiver from his toes up. The rest of the boys lined up behind him with forks.

We have our coffee and tea pots going over here. Anyone want a slice? 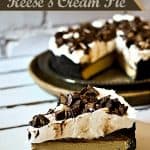 For the Oreo Crust:

For the Peanut Butter Filling:

For the Chocolate Ganache Layer:

For the Whipped Cream Layer:

To Make the Oreo Crust:

To Make the Peanut Butter Filling:

To Make the Ganache Layer:

To Make the Whipped Cream Layer:

To Finish the Pie:

To Slice and Serve the Pie: