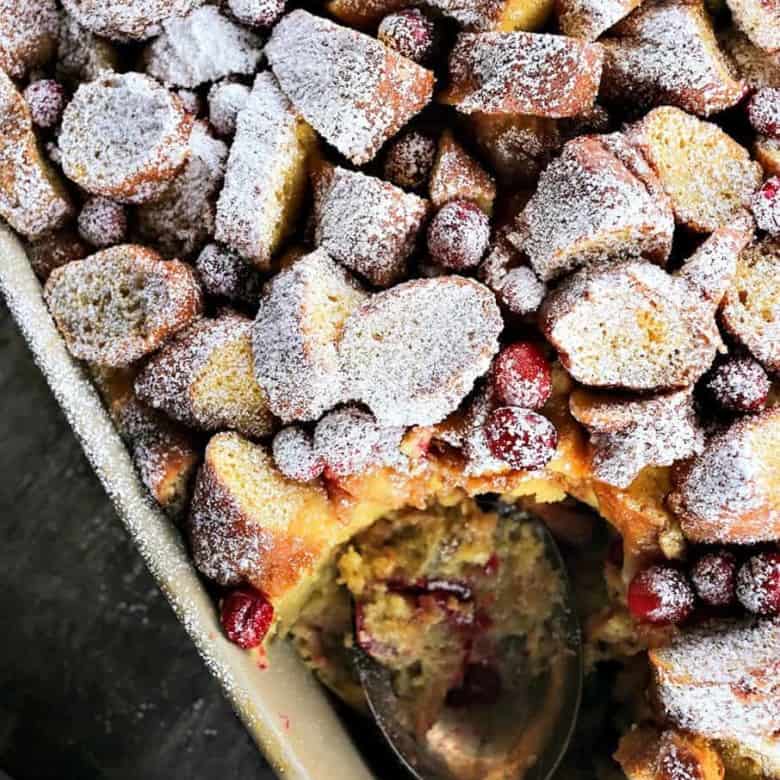 Cranberry Eggnog Doughnut Bread Pudding is made with a nutmeg flecked eggnog custard base soaked up by stale doughnuts which become a tender, rich and creamy, perfect counterpoint for the soft, baked, tart cranberries. This is the perfect cold weather or Christmas dessert.

People often ask me what it’s like to have five boys to feed. Given that four of our boys are teens and one is almost there, we go through an admittedly huge amount of food.

On the first Saturday of the month, our friends and Amish neighbors, Henry and Ada pull their horse and buggy into our driveway to give us a box filled with 2 dozen fresh, hot, fried yeast doughnuts with maple glaze that we ordered. Even as an avowed non-doughnut fan, I can’t resist these, but I have to move fast to get one before my beloved Biblical-plague-of-locust-boys get to them.

In September, it occurred to me that Henry and Ada’s doughnuts, if left long enough to go stale, would make tremendous bread pudding. The only trouble was that the boys polished off all of the doughnuts before any could go stale. 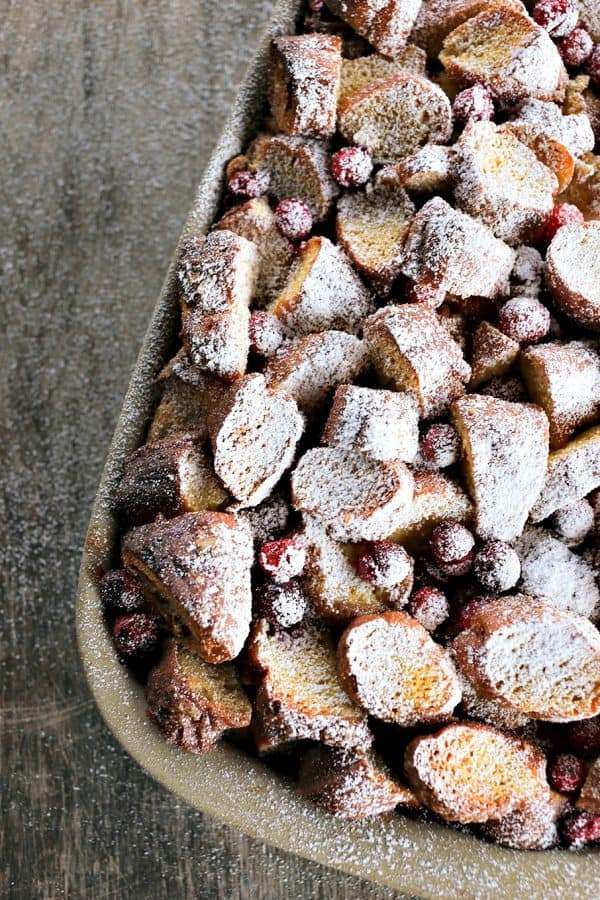 I figured I’d solve the problem by ordering an extra 6 doughnuts in October. Of course, you are probably foreseeing what happened next. There were no doughnuts left. I decided to order an extra 12 doughnuts in November. That would take us to a grand total of 36 doughnuts. To further ensure success, I immediately transferred 12 doughnuts to a box, poked holes in the side to allow air into the box to make them stale, taped the box shut with packing tape, and wrote “DO NOT EAT THESE!” all over the box then promptly ignored the box for 3 days. On the fourth day, armed with my other bread pudding ingredients, I opened the box.

If you have teenaged boys, you may know what I’m about to say.

All that was left in the box were some bits of glaze and half of a doughnut with tooth marks in it. I about lost it. I interrogated the boys who all pointed to their eldest brother. When confronted, he said he had indeed eaten them but didn’t realize they were meant to be left alone. I am not proud to admit I yelled, “WHAT DID YOU THINK THE PACKING TAPE AND ‘DO NOT EAT THESE’ WERE MEANT FOR?” to which he responded, “The cat?”

For December, I ordered 4 dozen doughnuts, put twelve directly into a paper bag, taped it shut, wrote “DO NOT EAT THESE AND I DON’T MEAN THE CAT”, waved the bag in the faces of my menfolk, told them in no uncertain terms what would happen (which may have involved threats of moving their bedroom to the drafty barn in cold weather), and put the bag on the counter where I could see it at all times. I took the bag to my bedroom every night and put it on my nightstand. And on the third day, I was rewarded for my vigilance with 1 dozen stale fabulous doughnuts. I made my Cranberry Eggnog Doughnut Bread Pudding. 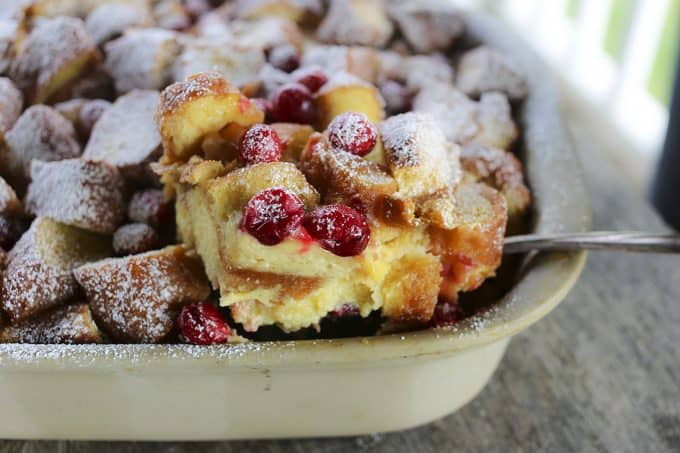 I suppose you might think that waiting that long and going to that much trouble just for a pan full of bread pudding would render the results anticlimactic, but you’d be wrong. Cranberry Eggnog Doughnut Bread Pudding was easily the best bread pudding I’ve ever made or, for that matter, eaten. The nutmeg flecked eggnog custard base was soaked up by those marvelous stale doughnuts and turned into a rich and creamy, perfect counterpoint for the soft, baked, tart cranberries. Even those boys of mine who customarily turn their noses up at fruit in desserts partook happily. It was worth the trouble and some.

…maybe next month I should order 5 dozen doughnuts? 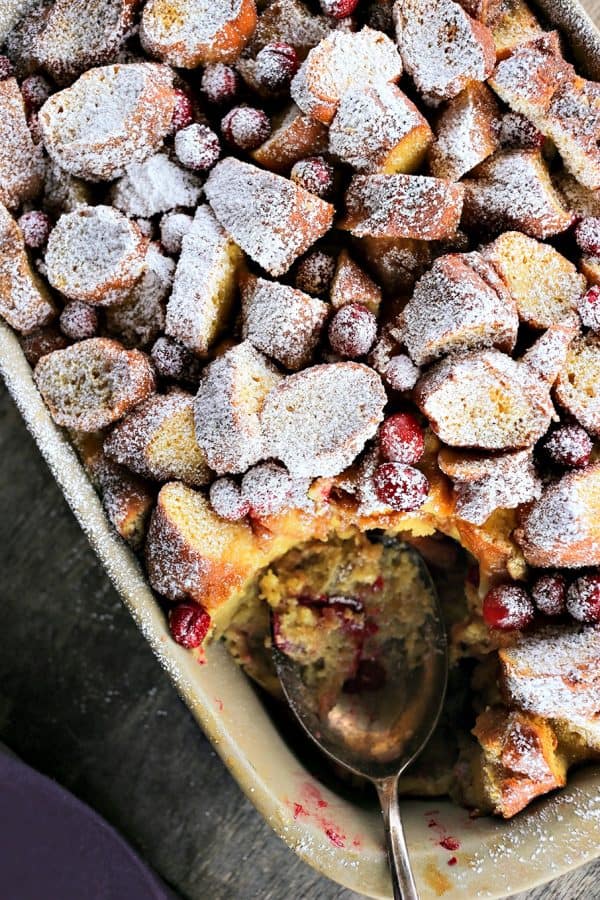 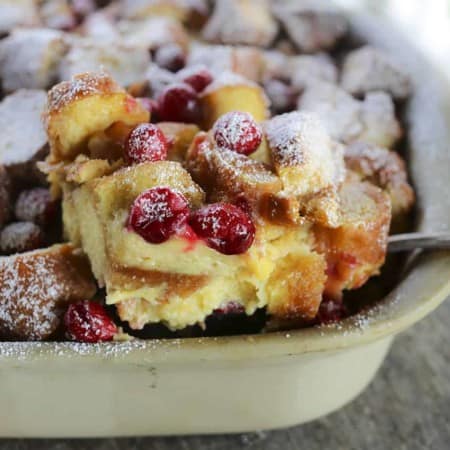