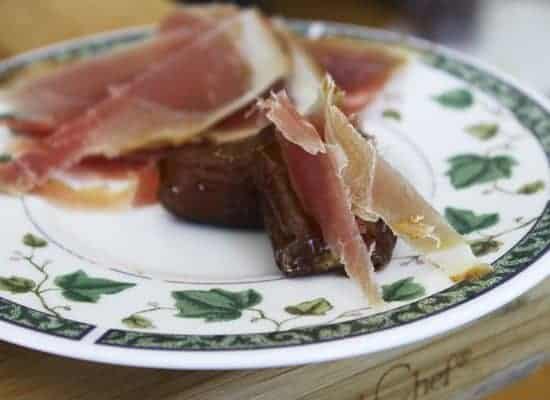 Have you ever had a real country ham? A proper country ham? As in salt-cured, hard-wood smoked, aged ham from south of the Mason-Dixon? If you haven’t, you really need to try one as soon as ever you can lay your hands on one.

Country Ham is a food experience unlike many in the United States.

Meat: Unrefrigerated, uncanned, and covered in mold. Aside from bleu cheese, there isn’t a lot of deliberately moldy food sold in our country. But make no mistake, this stuff is safe as houses. It is one giant cut of pork shoulder cured in enough salt to pay all the Roman Legionnaires of days gone by. It’s smoked. And then it’s aged.

It’s ham the way ham was meant to be. Intense salty ham flavor and chewy texture. There’s nothing even remotely insipid about this ham. It demands for you to love it. And I do. Oh, I do.

Around Christmas, my little sister, jockeying for Best-Little-Sister-Named-Christina-In-The-World status, brought us a Clifty Farms whole country ham when she visited from Virginia. I popped it on a hook in the cellar and saved it for a special occasion*.

*My special occasion ended up being Monday. Just because it was Monday. And I wanted ham. Don’t look at me like that. You try resisting a country ham in your basement.

When you remove the cheesecloth and parchment the scent surrounds you and makes your brain spontaneously combust with anticipation. Brain combustion. Little known complication to eating country ham. The deep pinkish brown rind, golden fat and salty flesh that ranges from almost black to smoky red are a straight up invitation to take a bite cave-man style, but I wouldn’t advise it.

There are a couple things to consider first. You’re going to want to soak it long enough to scrub that mold off. It’s not harmful mold, obviously, but keeping it on there doesn’t really enhance the overall experience. Most folks soak it overnight and give it a real overall scrub with a stiff brush. For detailed instructions on how to dismember your whole country ham and how to bake it, you can visit Clifty Farms website. Country ham is most commonly served in thick pan-fried slices with red-eye gravy. And that is one very good reason to buy a country ham in and of itself. But that’s not the only good and righteous thing to do with one of these.

So what did I do with my big old ham aside from standing in front of it carving off pieces and popping them directly into my gaping mouth? If you keep in mind that country ham is pretty similar to a good prosciutto (but smoked) you’ll have a good idea of where I went with it. I carved the whole thing up and portioned it out to freeze for later use, but saved a bunch of shaved end pieces, the most intensely flavored bits, to do today’s non-recipe recipe. Country Ham Stuffed Dates. If a festive dish got any easier it’d be laughable. I can see a plate full of these as the most envied appetizer ever or a couple lovingly tucked into a beautiful lunch with tart apples and an aged cheese .

A country ham, may at first glance, seem a bit pricey, but they stretch and feed the masses like no other. Because of the strength of flavor and the saltiness, a little country ham goes much further than a city ham of equal size. You get several different types of cuts of meat -slices for frying, big meaty pieces for chopping, shaved or chipped end pieces- along with a big soup bone and a lovely smoked hock. It ends up being a fantastic overall value.

Now a question. Seeing as I have a large amount of beautiful country ham in my freezer I would love to hear your ideas. What’s your favorite way to eat country ham? Or regular ham?

If, sadly, you are unable to procure a real country ham you can substitute thinly sliced prosciutto with good results. But please, for the sake of beauty in the world and food fabulousness, get thee to a hammery and pick up a piece of Americana. You won’t regret it.

This post was not sponsored, requested or otherwise noticed by the good folks at Clifty Farms. To my great chagrin, I’m pretty sure they don’t even know I’m gnawing on one of their hambones up here in rural New York. I seriously believe in their product, though, and think you should all try one of their whole hams at your earliest convenience. If Clifty Farms ever stumbles upon this and is seeking a mighty enthusiastic spokeswoman, they know who to ask! And of course, many, many thanks to Christina for her thoughtful gift.

Make a slice, lengthwise, in the date to but not through the center. Stuff a slice or two of country ham into the open date. Don’t overstuff as the ham is intense and salty. Arrange on a serving platter. Store leftovers, tightly wrapped, in the refrigerator. 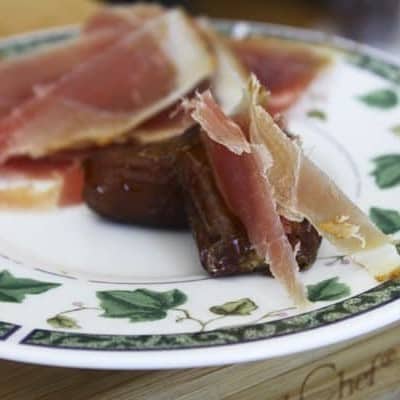