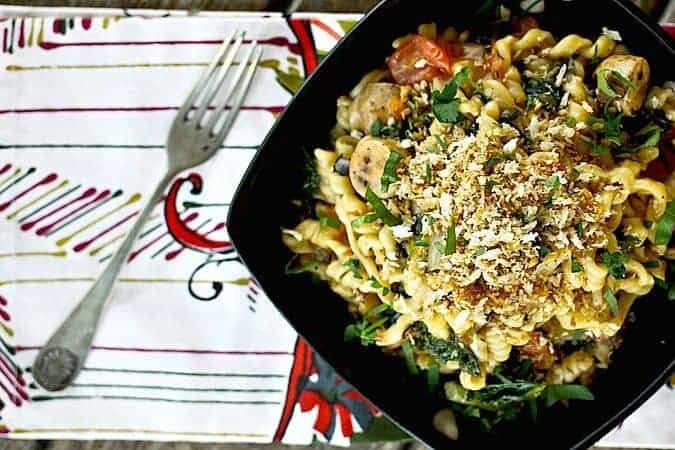 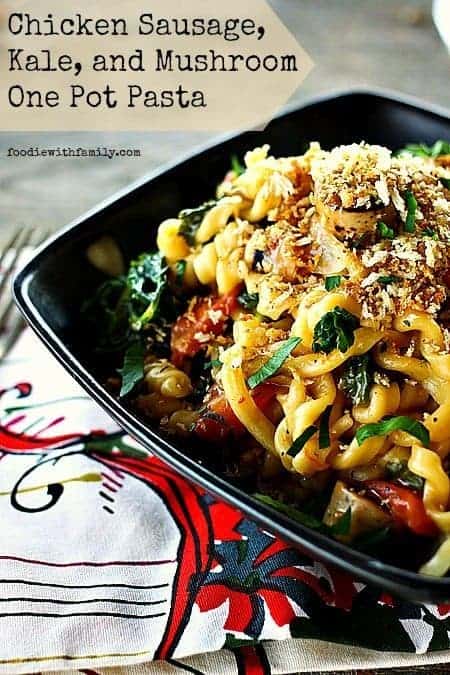 Is it just me or does already delicious pasta taste even better when it’s cold outside? And taste even better still when you’re in your coziest clothes and curled up under a blanket watching Benedict Cumberbatch as Sherlock?

Somebody PLEASE give me a high-five over Benedict Cumberbatch? At least throw me a little hand flutter or appreciative nod, would ya? Because -OHMYGOSH- that man can ACT. Maybe I’m a sucker for a brilliant, high-functioning sociopathic, superior, condescending, grandiloquent nerd-God with disheveled hair, but mercy! There’s just something about watching Sherlock and Watson run all over London in inclement weather stopping nefarious characters that makes the food taste mmm-mmm-good. I’m all Molly Hooper over here.

Besides all that hot brain and sizzling acting, Benedict Cumberbatch is just plain fun to say, isn’t it?

Today’s one-pot wonder tastes every bit as good when eating it seated at the table like a civilized person instead of a crazed fan girl in a dark room on a couch. You know, should you decide to emerge from the cave. Unlike me. I’m hibernating with Sherlock and Watson. After all, Sherlock doesn’t “go anywhere without his blogger.” And this Sherlock’s blogger doesn’t go anywhere at all when the weather is what it’s been lately.

But the pasta! This pasta deserves its own devoted fan base. It’s an addition to my growing collection of one-pot pasta dishes. Those marvelous, glorious, fantastical meals that somehow come together in under thirty minutes but taste superior to dishes that require vast planning and the precision timing of an elaborate Sherlock plan. I’m sorry. I’m trying to stop with the Sherlock this and Sherlock that, but once I get started…

It all starts out by toasting panko bread crumbs with fragrant poultry seasonings in browned butter. I’m clearly a fan of {Sherlock. Sorry} the crunchy, buttery, toasted, herbed, panko bread crumbs on these pasta dishes. Mainly this is because BUTTERY TOASTED BREAD CRUMBS. I’m fairly certain we don’t actually need another reason beyond that. The bread crumbs take a rest and grow crispier in a bowl while the pan goes back onto the stove top where we brown some chicken sausage links cut into coins. I like to use chicken and apple sausage here, because I think the sweet apple matches beautifully with the pasta, sauteed onions and mushrooms, kale, and garlic that are added in as it simmers in chicken stock. The final dish is a beautiful marriage of chicken sausage with sauteed onions and mushrooms, hearty kale, and noodles in a garlicky, creamy, tomato sauce that cooks around the pasta in a one-pot wonder that puts dinner on the table in under 25 minutes. Served with a topping of the Buttered Herbed Bread Crumbs, this is a meal that is sure to wow but still manages to be virtuous nutritionally. 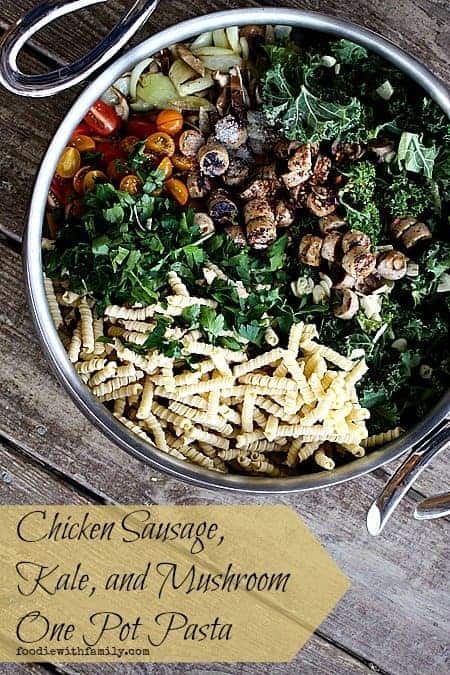 Rate Recipe Rebecca Lindamood
Prevent your screen from going dark
Print Recipe Pin Recipe
A beautiful marriage of chicken sausage with sauteed onions and mushrooms, hearty kale, and noodles in a garlicky, creamy, tomato sauce that cooks around the pasta in a one-pot wonder that puts dinner on the table in under 30 minutes. Served with a topping of the Buttered Herbed Bread Crumbs, this is a meal that is sure to wow but still manages to be virtuous nutritionally.

For the Buttery Herbed Bread Crumbs:

*Choose a thicker, longer cooking pasta rather than a thin, fine, or quick cooking pasta so that the kale and pasta are done cooking through in about the same amount of time!